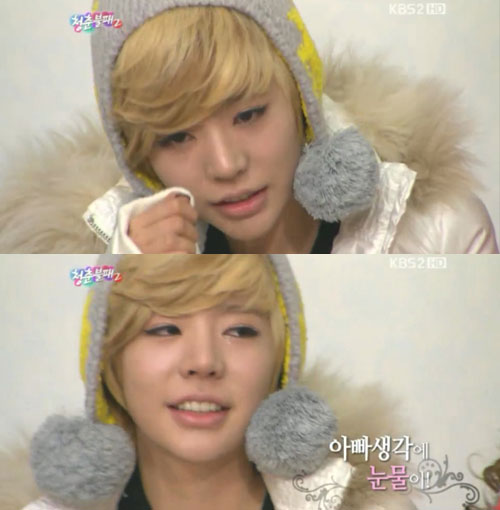 OMG You didnt read the title wrong!!! We all have to say bye bye to Sunny as she is going to leave SNSD Hyoyeon by herself on ‘Invincible Youth Season 2’.

Bwhahahahha you all fell into my trap again! Im too evil right? ….. srsly no kill meh blez…

But really, we do all have to say bye bye to Sunny as she is going to leave the IY2 family.

KBS’ ‘Invincible Youth Season 2‘ continues to make some changes to its cast member and I’m not sure what this new change could bring.

It has been revealed that Sunny will be leaving the show and her final episode will be aired tomorrow while Hyoyeon will still remain on the show.

An official from SMEntertainment revealed that it was planned when Sunny became part of ‘Invincible Youth Season 2‘. Being the only member from the show’s Season 1, they have agreed that she would only stay on the show until it became somewhat stable.

They think now is the right time, as Lee Young Ja is also set to join the show as it’s new MC. Invincible Youth Season 2’s last episode with Sunny will be aired on it’s July 7th Episode.

I’m sure everyone will miss your bikini body, chicken catching, weird and wonderful knowledge, funny and bunny moments!