Following SooYoung’s participation in TaeTiSeo’s previous goodbye stage, our Queen Of Dance, Hyoyeon, finally took to the stage with her ‘Dancing With The Stars 2‘ partner, Kim Hyungsuk, to perform a dance routine to the instrumental of ‘OMG’. The duo delivered a strong and powerful Tango which earned a positive response from the audience. After that performance, TTS appeared and carried out their last performance of ‘Twinkle’. Dressed in the golden outfits that they used when they started their promotions, the trio successfully concluded their ‘Twinkle’ promotions. Check it out below;

And in case SBS / SMEi removes the video, below are some backups 😀

Meanwhile, in response to their goodbye stage performance, fans all around the world trended #goodbyeTTS on Twitter after the show ended. within minutes, #goodbyeTTS was trending in third place worldwide. 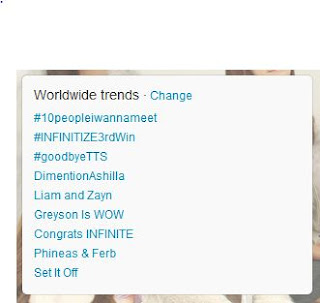 Finally, shortly after ‘Inkigayo’ ended, on SNSD’s Official homepage, Hyoyeon posted a message followed by two Selcas with her dancing partner and TaeTiSeo, and the other was Hyoyeon with EXO-K’s Kai. Take a read below; 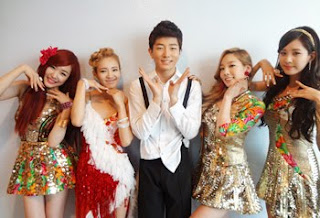 Today was TaeTiSeo’s last stage on Inkigayo..
It was great to be with them ~>_<
I was surprised to see the supports from SONEs!! It was amazing ~ Thanks a lot ~

As I will give more great performances at Dancing With The Stars Season 2
You guys have to watch and vote for me on every Friday night…everyone knows, right?? >_<

The meeting between dancing queen and king! Where is this?? ㅋㅋ
There will be a day we will be having a great performance on stage together, right??

I really love you, SONEs.^^