i shall never abuse sica with cucumbers ever again... unless i have allergy tablets cwhahahahahahah

We all know Jessica hated cucumbers which is why everyone trolls her with actual cucumbers!!… Well with some revenge to make us all feel guilty and ashamed of ourselves, some more secrets of SNSD has been revealed – Episode – Food Allergies!

On June 1st, MBC’s ‘Good Day’ conducted several interviews with various lunchbox-making companies. During the interview, one company that is known for making lunches for SNSD revealed that “we always match our menu for the fans who know what Girls’ Generation members like.” As the interview progressed, the company shared some of the surprising food allergies that certain members of SNSD have. For example, Taeyeon is allergic to nuts, while Jessica not only dislikes the smell of cucumbers, she is also allergic to them. On the other hand, Tiffany enjoys eating eel so much that her lunchboxes have sometimes contained not one but two pieces of eel. 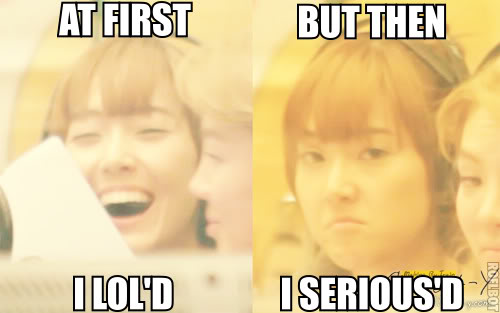 When asked about SNSD diet concerns, the company stated that they don’t make any special adjustments because the girls said that “they don’t need any special diet foods since they do a lot of dancing and singing and other activities.” So instead of cutting down portions or restricting only to certain foods, the lunchboxes are prepared with delicious ingredients that create a healthy balance between all the different food groups.