we lub u Sica!!! we hope you get more time for vacations!!!

Recently Jessica give an interviews for next month’s ‘Elle Girl’ magazine, as well as posing sexily for a photoshoot. Personally I totally love this photoshoot as she gives off her affection aura...i think its safe to say HOT DAMN~

Elle Girl: I want to know what you did the past week.

Jessica: This past week was like a time for me to recharge. No, I actually didn’t even get to rest that well. I went on some variety shows, did CFs and photoshoots. I’ve also been working on SNSD’s Japan album. I also went to Taiwan for a fashion event. Talking about it now, it seems I’ve become busy again. Still, this week was a time for me to rest. When I have personal time, I don’t go out a lot. I’m most comfortable staying at home, and like it the most. I just watch old movies and just bum around. Although it seems like I’m just wasting time, there’s a lot that I learned during that time. 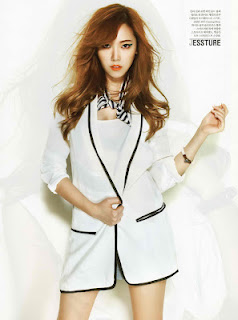 Elle Girl: I watched you make your musical debut in ‘Legally Blonde’ as Elle Woods. I was a bit surprised when I saw how perfectly you played the role. You also made an attempt in acting through the drama ‘Wild Romance’. Is there an area of work, other than singing, that you’re interested in?

Jessica: Singers of this generation are entertainers. You can’t just sing. I think of it as a chance, and want to pull out a growing me from that. While I should take a chance in more areas, acting is appealing to me. Acting is a work that follows your heart. You have to create emotions that suit the character, and those feelings change following the flow of the story. It helped me experience a lot more things that I expected. I want to experience it more and learn.

Elle Girl: You said you want to play the role of a player that isn’t hated. Do you have a good idea for that?

Jessica: I think it’s a job that I can’t do alone. It’s a job that would be possible with the help of the writer or director. How would it be cheating in a cheerful, cute, loveable manner? Haha. I don’t know if it even makes sense, but I think it could become a successful character.

Elle Girl: Guys talk about Jessica’s cold charm. They said they like it because they think you’d be scary.

Jessica: In one word, ‘Euing?’ I’m not a scary girl. But it’s not bad hearing that. I hear that I have a cold image, and seem arrogant, so it seems I look like that. Of course, I think that is one image amongst all the images I have. I’m shy around strangers. I approach people I’m close with with a more comfortable image. The nicknames my friends call me are the total opposite. They call me ‘heodang’ and ‘jinguk’ (someone who doesn’t lie).

Elle Girl: So that’s the twist in Jessica’s beauty.

Jessica: I don’t know about anything else, but I’m the type who tries to go on for a long time when dating someone. The fact that they’re ‘my person’ is important to me. Park Minyoung unnie, who I can tell anything to, is a person I’ve made friends with since before my debut. Rather than knowing a lot of people, I take knowing a lot about a person more importantly. 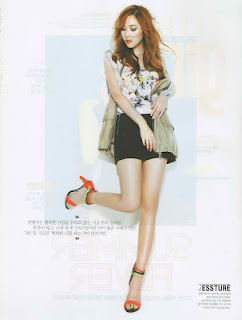 Elle Girl: You’re becoming a woman from a girl, but I heard you haven’t been on a blind date.

Jessica: That’s right. I don’t know what people do when they meet on a blind date, but I think I’d want an ordinary date. Eating ddukbokki on the street, and going to an amusement park. I ride scary rides well! But what if the person I’m meeting is afraid of them? Darn, that day’s date could be ruined then.

Elle Girl: A new transformation was shown through your new album, ‘The Boys’. I think the past 5 years was a time where you grew from a girl to a woman.

Jessica: It’s going to be 5 years since we’ve debuted already. Time really flies. I always did think a lot, but I think I’ve been thinking even more. I’m trying to become a little more cautious. I think I’ve become more understanding of people around me than before. I try to understand others’ tendencies and relationships. I’ve been able to laugh off a lot of things between my relationships with others. But it’s still difficult trying to look at things from other people’s perspectives. 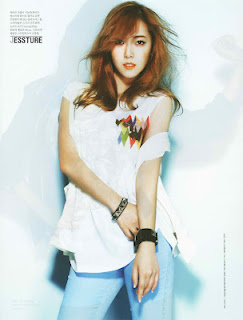 Elle Girl: You’re the game ender in plain-clothes fashion. Is there a secret behind your styling?

Jessica: I think people have been liking it because I wear things other people can copy, rather than dressing up. I personally don’t like styles that stand out. If you open my closet at home, it’s mostly plain clothes. There are a lot of things like oxfords, jeans, and t-shirts, and cardigans. Because they’re all similar styles, it’s easy to mix and match them, as well as layering them. You can take one outfit and make numerous outfits. No matter how flashy the design is, if it’s uncomfortable, I don’t think of it as good clothes. Not only is it uncomfortable for the person wearing it, but for others as well.

Elle Girl: Then can you suggest a fashion that would be fitting for a summer vacation spot?

Jessica: I want to go to Santorini, Greece. I think it’s a place that really suits summer. Have you seen the movie ‘Mamma Mia’? There’s a scene where Amanda Seyfreid, who played Meryl Streep’s daughter, wears a white one piece with her blonde hair flowing. While the trend has passed already, I want to go around there wearing an white eyelet dress that I personally like. I think the babydoll style, introduced through Dolce and Gabbana’s collection, would also suit that background.

Elle Girl: Is there a special vacation you remember?

Jessica: New York. I visited around this time last year. I met friends in New York and had brunch with them, and went shopping carrying chocolate covered strawberries. I thought to myself, ‘This is what a vacation is for me’. I think I’m a natural-born ‘city girl’, seeing how I like simple things like this over luxurious vacation spots in Southeast Asia.

Elle Girl: Is there side of Jessica that ‘only Jessica knows’ that you’re sad about people not noticing?

Jessica: I don’t wanna tell you. I have to be the only one who knows it for it to be a secret. 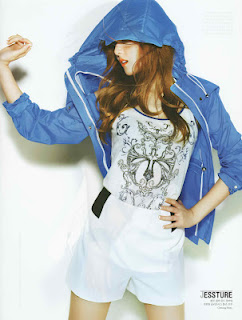 Elle Girl: The biggest worry for girls in the summer is dieting. Is there any advice you can give?

Jessica: A personal trainer comes to my house. I don’t do it consistently, every day, but only when I want, for as long as I want. Because it’s someone who I’ve worked with for a long time, they know my condition the best, and teaches me exercises that I should do well. There isn’t any other dietary treatment I receive. When I don’t have to go on television, I eat whatever I want. I don’t think diets should be done under stress.

Elle Girl: What are your future schedules?

Jessica: Starting in June, I think there will be more SNSD schedules, as opposed to individual ones. Our Japan album will be released sometime in the second half of the year. We’re working hard on it. Other than that, I think we will be able to show various appearances in other countries. 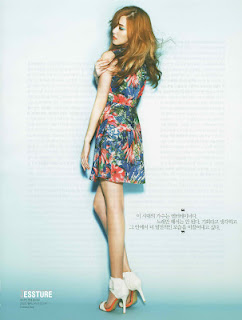 Elle Girl: What’s the future picture you dream of?

Jessica: I want to have a happy family sometime. With lots of laughter like my family now, and a family with sisters that have a good relationship like myself and Krystal. But finding a ‘happy me’ comes first now. I’m the type that gains happiness from little things. For example, I’m the type that feels like she’s got the world just after eating something good. Gaining a greater happiness after finding small happiness like this. That’s my life goal.

Elle Girl: What would you do if you were given a day where you could do anything?

Jessica: A day is too short. Can’t you give me more time? Then I’d just stay home. You said we can use supernatural powers, too? Then because time is short, I think teleportation would be good. I want to go to New York again and meet the same friends, and spend a fun day like a did before. While it’s unfortunate, I would have to come back home before the day ends. Before my powers disappear.