maybe we can expect something in the future because of this selca??????

During an SMTown ‘after party’, where most of SMTown artists including SNSD attended, there was a super special guest that made a surprise appearance! He is an American record producer, conductor, arranger and all them other names that you get for making music! With a record of 79 Grammy Award nominations, 27 Grammys, including a Grammy Legend Award, of course he is Quincy Jones! Recognized as the producer of the album Thriller by Michael Jackson, this mysterious man managed to catch a Selca…. with our Sunny!! Amazing… And by the way, you all know hes a FRIGGIN LEGEND right?? 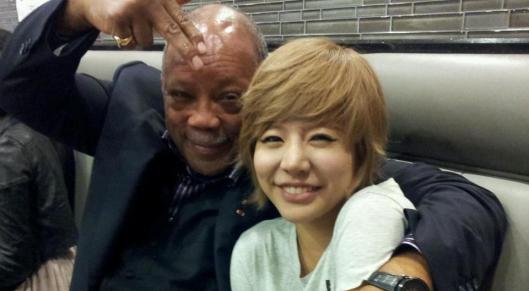 (And lol Sunny looks happy… i mean i would if i took a picture with Music legends….like snsd 😀 )

7 thoughts on “Sunny Bunny Snaps A Selca With Quincy Jones???~”