Our four out of nine angels will be appearing on an upcoming episode of KBS’ ‘Happy Together Season 3‘, they are; TaeYeon, Tiffany, Jesscia and Yoona! 😀 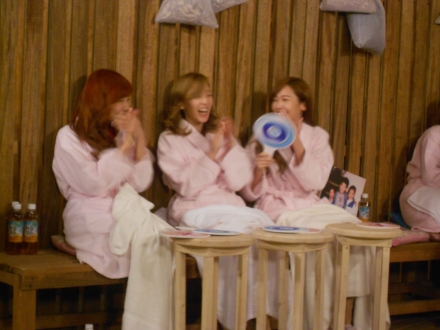 It has been almost five years since SNSD made their debut but the girls confessed that they still feel nervous when they go on stage! Jessica said that even though they have been performing many times, she still suffers from ‘stage nervousness’ and in fact, she feels even more nervous going on a small stage rather than a huge one.

Tiffany said that she could feel her hands and knees trembling while performing on their debut stage as TaeTiSeo. She also talked about how Taeyeon’s hands were shaking while holding the microphone during an interview which was carried out right after their performance. Taeyeon then stated that although SNSD has been active for almost 5 years, they still feel nervous.

This fun looking episode will be aired on May 10th. Meanwhile, check out some photos below to tease yourself 😀

6 thoughts on “Our Girls’ Are Still Nervous On Stage?~”