Hello readers, so it’s been another great year on this blog!  Today is the 4th anni that SNSD Korean has been in existence!  Personally, I’ve only been on the staff for a little while, but we’re planning on making this next year bigger and better!  Continuing with Boss Lady’s vision, we’ll always bring you the latest news on our girls (even if it’s a bit late, sorry we personal lives too :P), our original pieces from the talented staff, informal spaz session podcasts and FMV’s on the fly.  So always stay tuned for new material, or better yet, if you want to make it happen, please apply here!  We’re especially looking for talented writers to hire!

Now let’s not forget who makes this blog what it is, YOU!  Thank you so very much for supporting us and reading our posts daily!  Without you, the reader, this site is just another place on the internet taking up space!  Keep supporting us, our cause and we’ll do our best to feed you your Soshi addiction!  We love comments as well.  I know lots of you are lurkers out there, but personally, I love seeing comments from readers!  It lets me know you are enjoying the articles we post.  So please, comment!  Anyway, thank you again for your support and continue to support the blog!

Now, for a special 4th anni post.  If you remember wayyyy back from last October, our girls were in New York weren’t they?  Without further ado, here’s my fan account from SMTown Live in NYC last October!

My story starts on the Friday before the concert.  I flew out of SFO at around 8AM on a non-stop to JFK, a 5 hour flight across the country.  I arrived in New York around 4:30PM local time and took the subway to Manhattan to our hotel.  I hadn’t been to New York since I was a kid, so this was like my “first time” visiting this busy East Coast city.  The first person I met up with was Lawrence (greeentee).  We explored Times Square while we waited for Joyce (ferrerorocher9) and her boyfriend Eric to arrive. 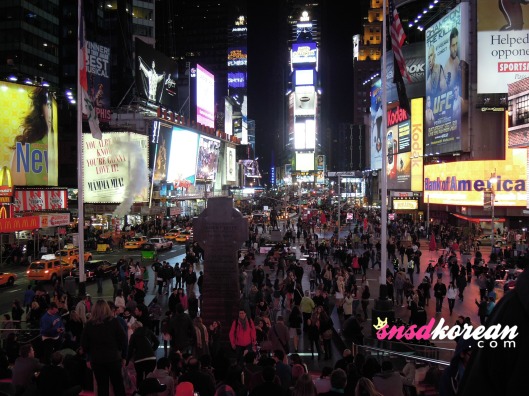 After they arrived, we decided to try the famed, local favorite Shake Shack for dinner. 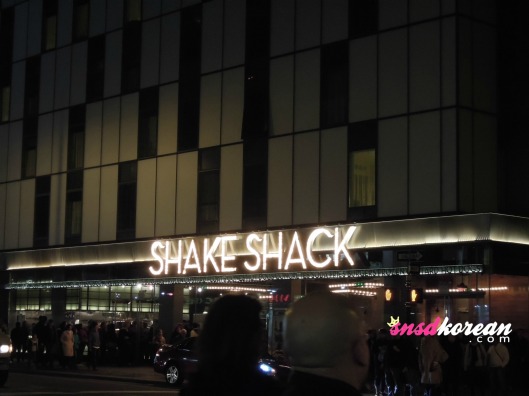 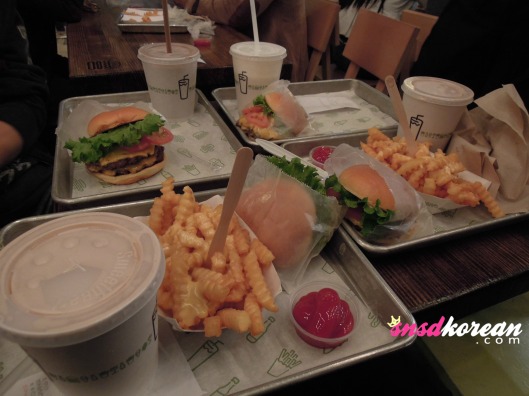 I thought their burgers and fries were good, but me being a West Coast boy, I still like my In-N-Out better!  However, I have to give props to their milk shakes.  The chocolate shake I had was fantastic.  Rich, creamy and the perfect thickness.  Full of yum!  After dinner, we continued to explore Times Square until the early morning hours (Writers note:  I spent my time in NY with Lawrence, Joyce, Eric, Lauren (plotbunny), and her friend Miranda, with meet ups with other staffers).

Fast forward to Saturday early afternoon, we had to try another New York favorite.  This time, we tried Katz’s Delicatessen.  This restaurant has been featured on the Food Network and has over 2,000 reviews on Yelp. 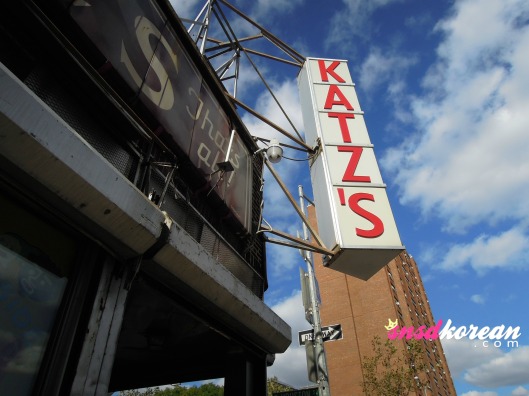 They are known for their pastrami sandwich.  Lawrence and I decided to split the pastrami and another popular sandwich, the Ruben. 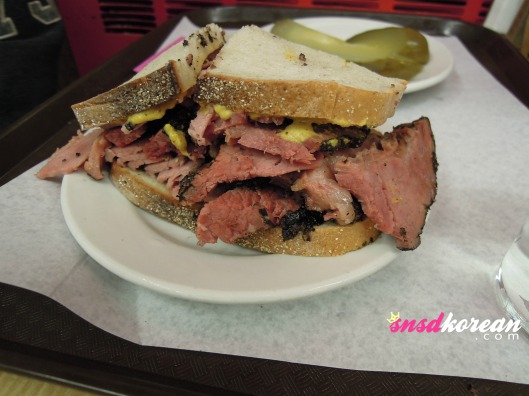 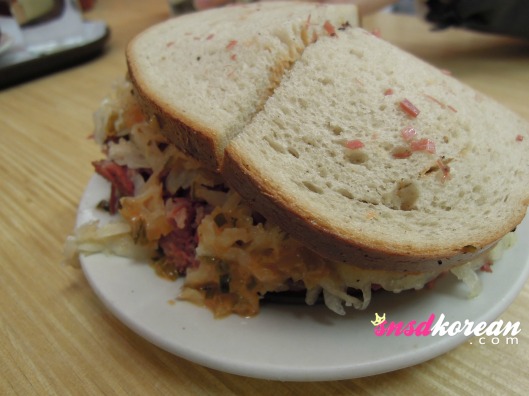 I thought they were both delicious.  Surprisingly, I liked the Ruben more than the pastrami.  I think the pastrami was a little too salty for my taste.  The atmosphere in the restaurant was that of a dining hall, haha.  Lots of people, pretty loud, and everyone enjoying themselves.  Typical New York right?  This place was full of celebrity pictures as well.  Every wall was covered with picture frames, top to bottom.  That’s how popular this place is. 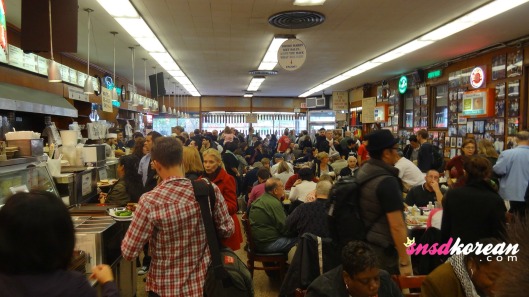 The afternoon consisted of us exploring Manhattan some more.  We walked around Chinatown, tried the popular rice pudding place Rice to Riches and did some shopping at 5th Ave.  When we were planning this trip, we told ourselves we had to try Bon Chon at least once.  From what I’ve been told, it’s a pretty popular East Coast chain.  That is what we had for dinner on that Saturday night.  Good ‘ol greasy, deep fried, Korean style chicken.  Doesn’t get much better than that! 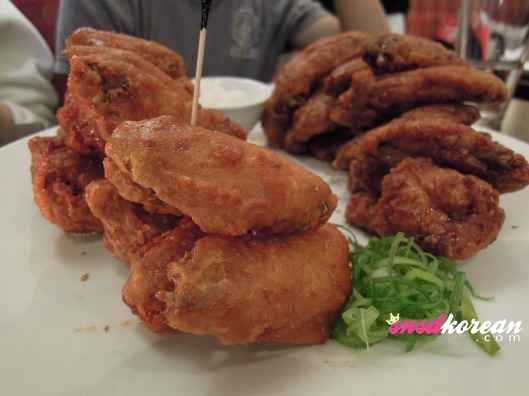 After dinner, we headed back to Times Square to enjoy the scenery and take in a typical New York night.  What we didn’t expect to see was a huge pink bus driving around the Times Square area.  Not just a pink bus, but one with SMTown Live in New York decals plastered all over it! 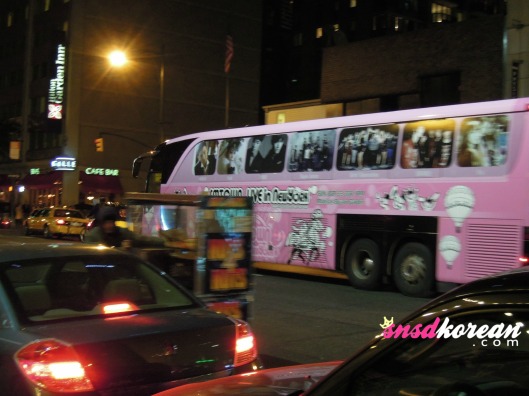 If our suspicions were correct, the girls were actually on the bus at the time we saw it.  We later found out that the girls had arrived in New York at around that time, and presumably were being shown around the city on their own private tour.  We must have chased that bus for blocks until we couldn’t stay up with it anymore.  I think that night ended with everyone spazzing about seeing that pink bus!  It just got us more pumped up for the show the following day.

Once we woke up on Sunday, we had our SNSD Korean staff meet up.  Lauren (plotbunny) and her friend Miranda met up with us beforehand, and then we went to find Michelle (FrozenArctic) in Times Square.  We headed to Koreatown and ate at Arirang Korean Restaurant.  There, we also met up with Cat (catfatcat) and had ourselves a good ‘ol time talking about SNSD and the blog.

After lunch, we found a place to take some staff pictures for memories of this epic trip.  You’ll see the pictures in the video below.  While we were taking pictures, we ran into some loyal readers of the blog who were nice enough to take a picture with us!  Thanks ladies!  Here’s your shout out!  Comment if you read this! 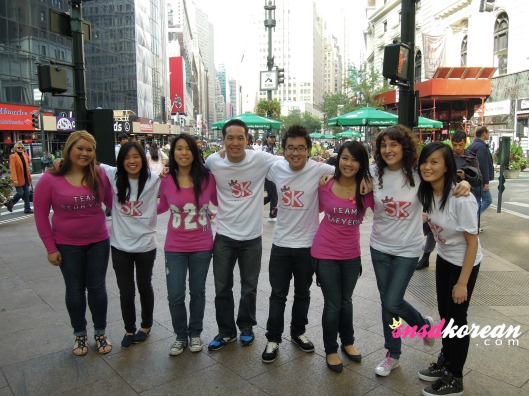 Later, we headed over to Madison Square Garden to take our seats and get ready for the show.  The atmosphere was electric.  Pink shirts everywhere, long lines for merchandise, and generally lots of excitement in the air.  A huge Kpop concert was about to invade New York!  As for the show, I thoroughly enjoyed it.  All the SM artists did a great job with their acts.  It was loud, it was action packed and the arena was pumping with enthusiasm.  Not to mention, the show was sold out!  Money well spent.  A few highlights are as follows:

Jessica and Krystal did their duet of “Tik Tok”. 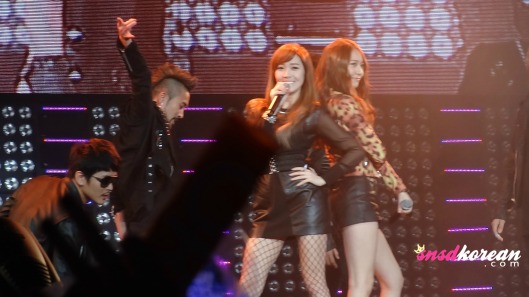 While Sulli and Kangta’s duet was quite a cute one 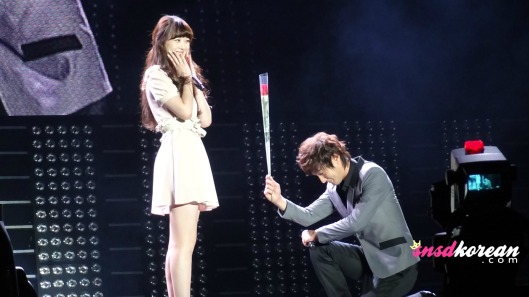 And let’s not forgot the maknae performance of Seohyun and Kyuhyun!  One of my favorite duets! 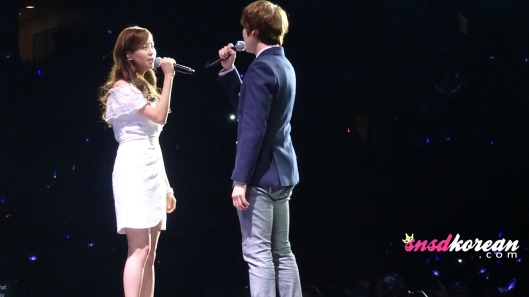 The girls even performed my favorite song, Sowoneul malhaebwa (Genie)! 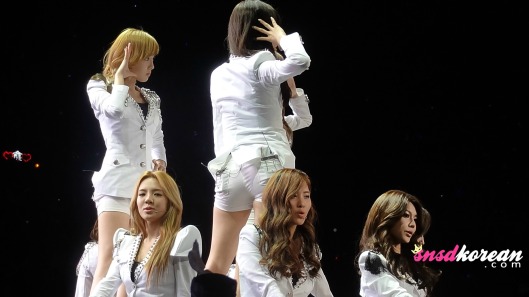 I’ll never get enough of the rap version when they appear together on the platform and Tiffany tears it up with her rap!

Sadly, after almost 3 1/2 hours, the show had to end :(.  Again, I had a great time and would definitely do it again if SMTown has another show in the US or SNSD has a solo concert, wink wink SM ;).  After the show we headed back to Koreatown for dinner.  We stopped over at Miss Korea BBQ and stuffed our faces with delicious Korean food. 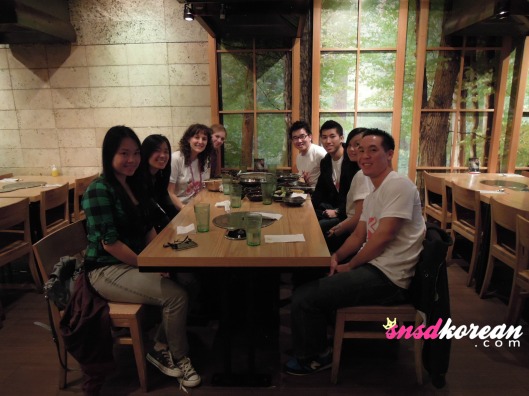 What happened after we ate was the exciting part.  We left the restaurant and walked back towards Madison Square Garden.  We saw a huge crowd gathered around another Korean restaurant down the street (and that coveted pink bus waiting in front).  The same restaurant Lawrence had mentioned earlier in the day as a possibly for the dinner! Lawrence, why you not so assertive!!  As it turned out, some of the SM artists were eating at the restaurant!  We saw, if I remember correctly, Key, Sooyoung, Hyoyeon and Yuri hop onto the bus, while Kangta was still in the restaurant eating.  We even got to wave to Kangta as he had a window seat at his table.  He even waved back multiple times to the fans!  As the bus was waiting to leave, Hyoyeon was doing her best to hide :P.  I see you Dancing Queen! 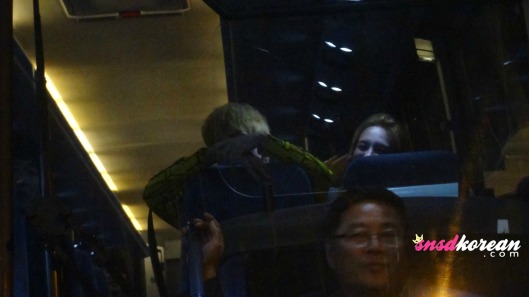 After that, we spent the rest of the night wondering Times Square again and enjoying the night.

Fast forward to Monday, this is where this journey had to end :(.  Like most people, I had booked my flight way before the news broke that SNSD was going to have their first US Fan Meet.  I was unable to attend the fan meet, which made for a bit of a sad face :(.  Overall, I had a great time on this trip.  It was totally worth the money spent, the hours in transit, and the logistics involved to set everything up.  More importantly, meeting the other staffers in person and getting to know them on a more personal level is priceless.  Stronger friendships were created during this trip which I will cherish for the rest of my life.  Even though we physically live all across the world, in spirit, we’ll always be together through this blog.  I’ll leave you with this group picture as a token of the memories made on this trip 🙂 (deng it Michelle, why did you have to bolt off so fast :P!). 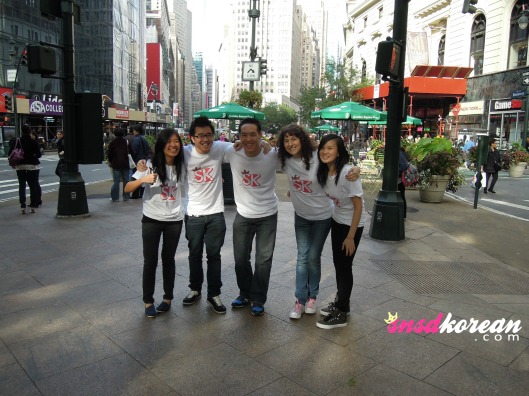 And, as a bonus, being the editor that I am, I made a video of the experience in New York!  Enjoy!

Special thanks to greeentee and ferrerorocher9 for the pictures!