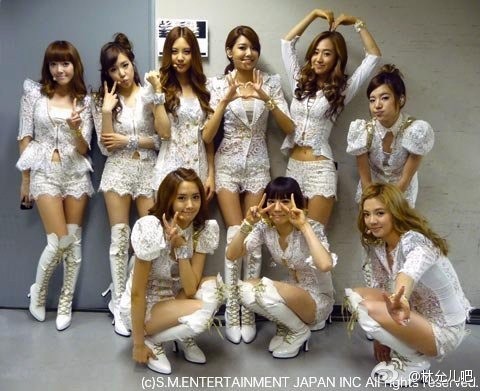 The last time the globally recognized news network sat down with Girls’ Generation, members Jessica and Tiffany and S.M. Entertainment’s former company CEO Lee Sooman were the only ones present for the interview. This time, however, all nine Soshi members were on hand to chat with CNN’s Robert Michael Poole about performing, occupational pressures, downtime, and future musical aspirations. Poole also speaks with the Bureau Chief of Billboard Magazine Tokyo to gain insight on what it takes for foreign acts to successfully break into the American music market. Full interview after the cut.

Girls Generation as a closing act for Summer Sonic 2011 in Japan.

Music-lovers attending Japan’s largest music festival, Summer Sonic, have become accustomed to catching sets by the world’s biggest musicians, from headliners Jay-Z and Beyoncé to Coldplay and My Chemical Romance.

This year though, a “special guest” closed the show in Tokyo.

Girls Generation is the first Korean act to close the Japanese festival — and follows in the footsteps of a previous late-night special guest, Lady Gaga.

“We feel like rock stars!” said Tiffany of Girls Generation, moments before taking the stage. “It’s completely exciting to attend a rock festival when we are not rock, so we are hoping we can give it a different twist for this year’s show.”

The appearance came as little surprise to music fans in Japan.

In June, Girls Generation’s self-titled album became the best-selling debut ever by a foreign artist in Japan.

It’s gone on to break the 500,000 sales barrier, making the group the highest-earning foreign act in Japan this year.

The silver lining around their outfits — glittering black skirts, designer waistcoats, knee-high boots — proves an apt metaphor for the years of training the girls have been through.

But spend a few minutes with the chipper Hallyu leaders, and you sense their international careers have just gotten underway.

Backstage, clearly excited to be part of the eclectic Summer Sonic, California-born Tiffany couldn’t wait to show audiences her enthusiasm.

“We are definitely fans of the artists here and it’s great to be standing on the same stage as them,” she says, while perched on the edge of a sofa for nine.

“We heard Avril Lavigne and Panic at the Disco! but it wasn’t fair because Sunny walked in screaming ‘I saw James Blunt!’ and Seohyun was so sad!” says Tiffany, throwing a sympathetic arm around Seohyun.

The group has already performed shows as part of the SM Town Live tour in Los Angeles, Shanghai and Paris, and they promise future shows in other international cities.

But 22-year-old Sunny is keen to join more festivals “wherever our fans are … but if we had to choose somewhere in particular, how about South America?”

With girl groups being the latest in what has become a Korean Wave machine, Girls Generation are one of many hoping to break into the coveted U.S. market.

“We debuted in Japan last year so we sing in Japanese, but we would definitely like to sing in English and make a worldwide record,” says the group’s second U.S.-born member, Jessica

Breaking into the West 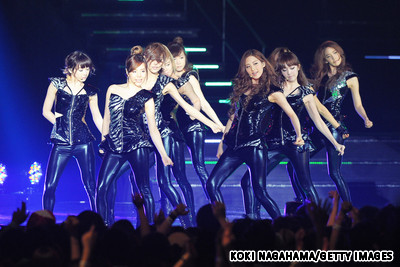 Billboard Magazine Tokyo Bureau Chief Rob Schwartz believes that it is inevitable that an Asian artist will eventually break in the United States. Could it be Girls Generation?

“I think it’s unlikely that any wave is going to break through the way that K-Pop has in Japan,” Schwartz says. “America is too big a market for that and the United States and European markets are not very unified, anyway. But an Asian artist will break through at some point.”

If Girls Generation can achieve the ultimate crossover, they will feel it’s well-earned. Jessica signed to SM Entertainment at age 11 in 2000 and all of the girls have been through years of training.

“We don’t think we achieved success quickly because we spent a lot of time ptacticing and spending our school years together,” says Jessica.

“We spent out entire lives preparing for this, so of course all of this incredible success is a blessing, but we’ve waited for so long and we are only just beginning to show what we have,” adds Tiffany.

The group also reveals personal ambitions, suggesting that each member has her own plans both inside and outside of the group.

“Each girl has practiced choreographing, acting and singing, so we are looking forward to being in the group, but also showing individual acts,” says Tiffany. 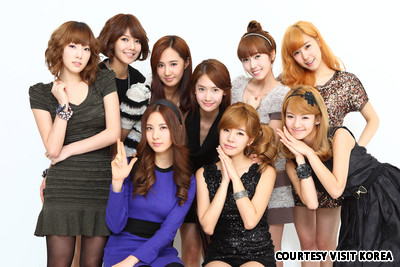 The amount of training K-Pop groups go through has led to many stories of undue pressure and overwork. Hyoyeon and Jessica are quick to dismiss the negative portrayals.

“We stay fresh by being silly!” says Jessica.

“We like to get together and play games, talk, have sleep-overs, eat and normal girls stuff,” says Tiffany. “Everyone’s silly, no one is quiet. That’s the specialty of the group, we are extremely loud!”

“We also have free time to ourselves, and we spend it with our family and friends,” says Jessica. “These days, we are travelling a lot to different countries all over the world, but we like to spend time in Korea.”

Over the next few months the girls will be promoting a new album in Korea, an album comprising “a wide variety of songs” recorded over two months, followed by a tour.

“Being on stage with all nine of us is refreshing and energizing,” says Jessica. “It’s the energy that’s important — we call it Girl Power!”

“It’s especially exciting because we get to spend the whole three hours performing, all nine of us,” adds Tiffany. “We always have a different concept when we go on stage, but I think what it comes down to is the group is always about being natural.”

Looking to the future 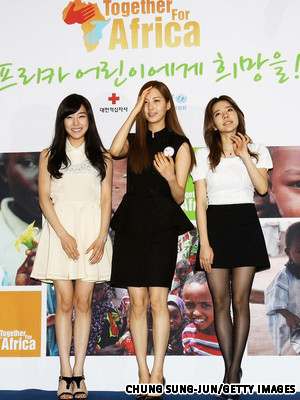 Tiffany, Seohyun and Sunny of Girls' Generation attend a ceremony for South Korea's Red Cross and UNICEF in August 2011.

Schwartz believes that if the group is to succeed in other countries, it’ll take more than hard work and energy.

“It’s extremely difficult to break a new act, it takes a tremendous amount of money and savvy, and that’s not limited just to Korean or Japanese acts, it’s just as difficult for American acts,” Schwartz says.

Asian acts are a tough sell for various factors, according to Schwartz.

“[Korean companies] tend to be equally as unwilling to deal with things the way they are done in other markets as the Japanese,” he says.

“They always want people to deal with things on their terms and not on other people’s terms. On the other hand, I think that Korean acts try harder because Korea is a smaller market than Japan, so they know they have to go out.”

“It’s clear Asian acts need to adapt to American music preferences, but hopefully it doesn’t equal mimicking,” he continues, when asked how Girls Generation might break through. “They need to grab people’s attention with a cross-country campaign and I think what might work is a tie-in as a brand spokesman for a big brand, across the country, so their faces are in front of tens of millions of Americans.”

“We would love to be like Beyoncé, sexy and powerful!” says Hyoyeon.

“She’s hot and has this amazing presence on stage that we’d all love to learn about,” says Tiffany. “We need to be nine Beyonce’s!”

Girls Generation will perform at a special charity concert in Niigata to help raise funds for the victims of the Tohoku earthquake on Saturday, August 20, followed by three nights starting September 1, at the 55,000 capacity Tokyo Dome as part of SM Town Live from September 1.