I present to you SNSD Korean’s most ambitious project to date: The destruction of all bug life on Earth.

Unlike cucumbers, this time it’ll be a whole different battle. In numbers, insects count for more than 90% of the earth’s population. They suck your blood, attack your pets, and are just pretty annoying creatures in general. While this has been happening for millennia, they’ve now stepped too far. On the evening of July 24, 2010, 2 different bugs launched coordinated attacks on Yuri and Taeng. If a unicorn’s blood can grant immortality, then just think of what a mosquito with Soshi blood could do! World domination is probably on its list, but I’m pretty sure that was intended to be a 9-person job.

As SONEs, our response for this threat is to ReACT (Retain an Always Cheerful Tiffany). Miyoung, being the protective member she is, is actually more worried about the well-being of her sisters after these unsuccessful attacks than she is afraid of bugs. Fany’s happiness is an indicator of the state of affairs in the world, and it’s up to us to restore balance.

So how exactly do we go about launching Operation SUBTRACT to eliminate a good 9/10ths of life on Earth you ask? Apparently, birthday girl has had the answer the entire time: Bug Raps and Eye-Smiles. Lots of them. Do it every time you’re outside in public, and the bug populations will start to reduce at an exponential rate. I’m srs here, just eye smile-> bug rap whenever you exit a door. Non-SONEs will think you’re crazy, but just remember: they’ll thank you one day – they just don’t realize you’re saving the world.

Eye-smiles after eye-smiles will naturally form after all of this: 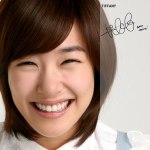 We know we’re a bit late on the Tiffany posts since birthday stuff traditionally starts a week before, but that’s okay! We’ll just give you a boat load of Fany content without the usual one day breaks. We would never neglect a Soshi’s birthday because of our own lives.. pffttt.

A/N – Yes, I realize that killing all bugs on Earth would lead to the destruction of.. life. This piece was written with a high level of sarcasm and random ranting; it should be taken lightly. Please do not go to your local exterminator unless you’re living in Korea, Japan, or the Los Angeles area.

Other fail acronyms (just like the one above) that were considered

SCRUB: SONEs Carrying Repellent for the Undoing of Bugs
SU-EPT: SONEs Uniting Exterminators for the Protection of Tiffany

Please don’t kill me boss for using the mass-uploader. =)